Medals and photographs contributed by the Rev. Frederick J. Schumacher 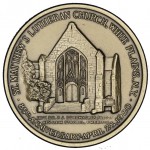 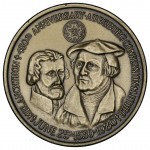 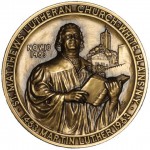 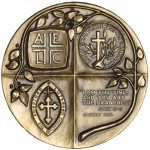 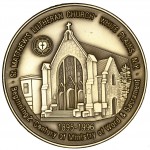 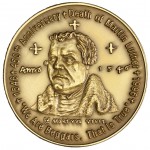 Reverse: 450th Anniversary of the Death of Martin Luther 1996. Anno 1546. Et mortuus vivit (He lives beyond his death–Philipp Melanchthon). Some of Luther’s last words were: “We are beggars that is true.” The picture of Luther is based on a drawing by Luther’s student Reinfeinstein, made during Luther’s last lecture in 1545. 57.5 gr; 51.2 mm. Brozatus #223, who mistakenly translates ministry as Herrschaft. 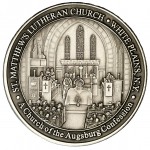 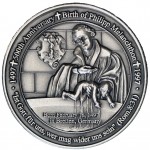 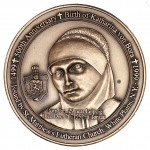 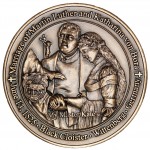 Obverse: 1499 500th anniversary of the Birth of Katharina von Bora in 1999. The image of Katharina von Bora is based on a 1528 painting by Lucas Cranach the Elder. To the left of her image is her family coat of arms. Born Jan. 29 near Leipzig. Died Dec. 20, 1552, in Torgau.
Reverse: Marriage of Martin Luther and Katharina von Bora. June 13, 1525. Black Cloister. Wittenberg, Germany. The words of Luther:  “My Master Kate.” The image is based on a drawing of their wedding that appeared in the May, 1872, issue of Harper’s Weekly. That image was modified by bringing the hand of Johannes Bugenhagen (1485-1558) and the crucifix closer to the couple. To the left of Luther is the image of his publishing trademark, the triumphant lamb.  Issued by St. Matthew’s Lutheran Church, White Plains, N. Y. Their pastor was the Rev. Frederick J. Schumacher. 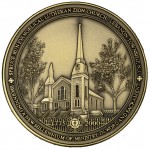 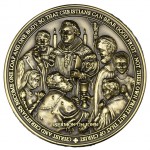 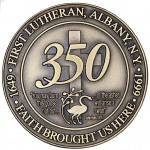 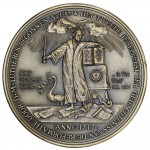 Obverse: First Lutheran, Albany, N. Y., 1649-1999. Faith brought us here. “You may burn this goose, but out of the ashes will arise a swan.” John Huss 1415 (1371-1415). The focus on the swan and vine remains from the original congregational seal with the addition of a cross, the anniversary year, and the wording around the medal. In some countries a swan is placed on top of Lutheran church steeples.
Reverse: Het Tweede Iubelfest Ter Gedachteniss van de Reformatie Door D. M. Lutherus Begonnen Ao 1517 (The Second Jubilee in Remembrance of the Reformation which Dr. M. Luther started in the year of our Lord 1517). God’s hand reaches out to place on Luther’s head a crown of laurel (see 2 Tim 4:7-8; 1 Cor 9:24-25). Luther holds in his right hand a candle symbolizing Luther’s restoring the light of the gospel. Newly discovered islands in the west 1541 (a quotation from Luther in Supputatio annorum mundi, Weimar Ausgabe 53, 169). Luther’s left arm rests on the Bible, which is opened to Ps 119:19 (a mistake for v. 89). The reverse replicates one of the earliest Luther medals that marked the 200th anniversary in Amsterdam of Luther nailing the 95 theses to the Castle Church door in Wittenberg (See Brozatus #822). Brozatus #1669. 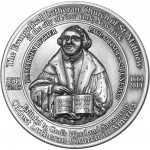 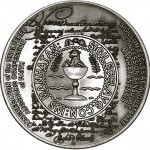 Medal celebrating the 350th anniversary of  St. Matthew Lutheran Church on the north end of Manhattan Island 1664-2014. The oldest Lutheran Church in the United States. Congregation of the Unaltered Augsburg Confession of Faith. Designed by Scott Blazek, Frederick J. Schumacher, and Peter Deebrah. Luther’s garment on the obverse is from the 17th century. The reverse shows the lamb of God above a chalice. The reverse is based on a design by Sebastian Dadler. Ralph W. Klein was a pastoral intern at St. Matthew’s, 1960-1961.