These books are located in Case 8, rows 4 and 5, except where noted.

Andreae, Jakob. Solida Refutatio compilationis Cinglianae et calvinianae…. Tübingen, 1584. 687 pages.  Written to respond to a work by Christopher Herdefian, published in Heidelberg in 1574. A major work of apologetic theology directed against the Calvinistic interpretation of the sacrament. Andreae (1528-1590) and Martin Chemnitz were responsible for the Formula of Concord. Andreae published some 150 works, mostly critical of Calvinism. Folio, flexible full pigskin. 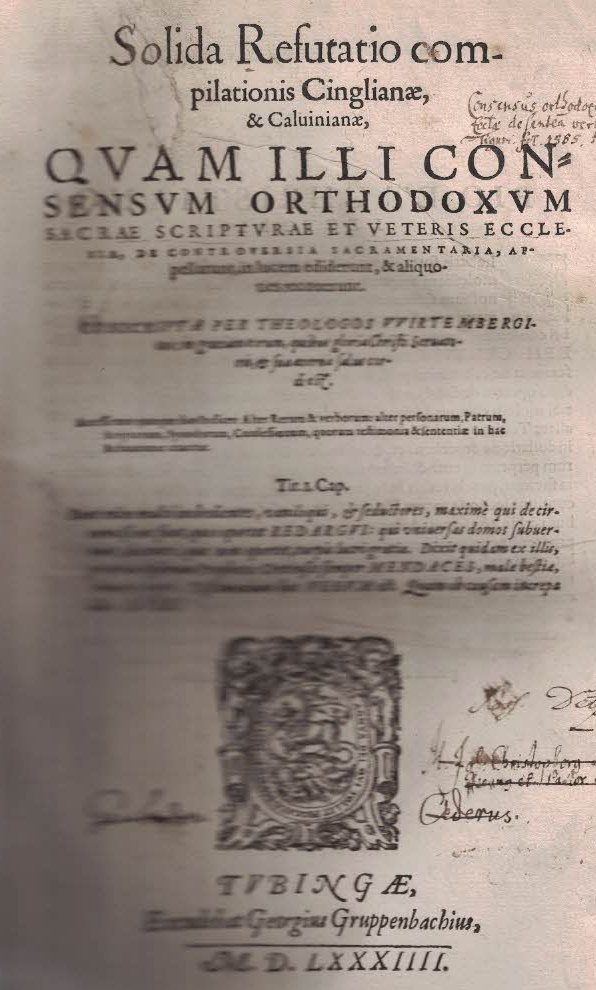 Beza, Theodore. Jesu Christi D. N. Novum Testamentum. Geneva: R. Stephanus, 1565. Beza, 1519-1605, was Calvin’s successor at Geneva. This is the earliest of Beza’s editions of the New Testament, with his Latin translation and commentary. The words “hac secunda editione” in the title refer only to the Latin commentary, which had already appeared earlier. Beza himself owned Codex Bezae (5th or 6th century) and Codex Claromontonus (6th century, though he made relatively little use of them for they deviated too far from he generally received text of the time. Beza’s editions tended to popularize and sterotype the Textus Receptus. Beza was the first scholar to collate the Syriac New Testament. The text in this edition generally follows R. Stephanus’ fourth issue of   1551, but variations occur in 25 passages, in nine of which Beza adopts a new reading. In his Latin translation of the NT many emendations of the text, some of which are translated to the Greek. Stephanus was a Paris printer who produced an eight volume Greek dictionary. He left Paris because he printed a New Testament and was threatened with death. Folio. Modern half calf binding, recently done for Professor Krentz. The device on the title page is an olive tree, with the motto Noli altum sapere. Dedicated to the most serene queen, Elizabeth. Three more major editions appeared in 1582, 1588 or 1589, and 1598. . JKM library has a later octavo edition without the commentary. Beza’s editions influenced revisions of the  English Bible down to 1611. 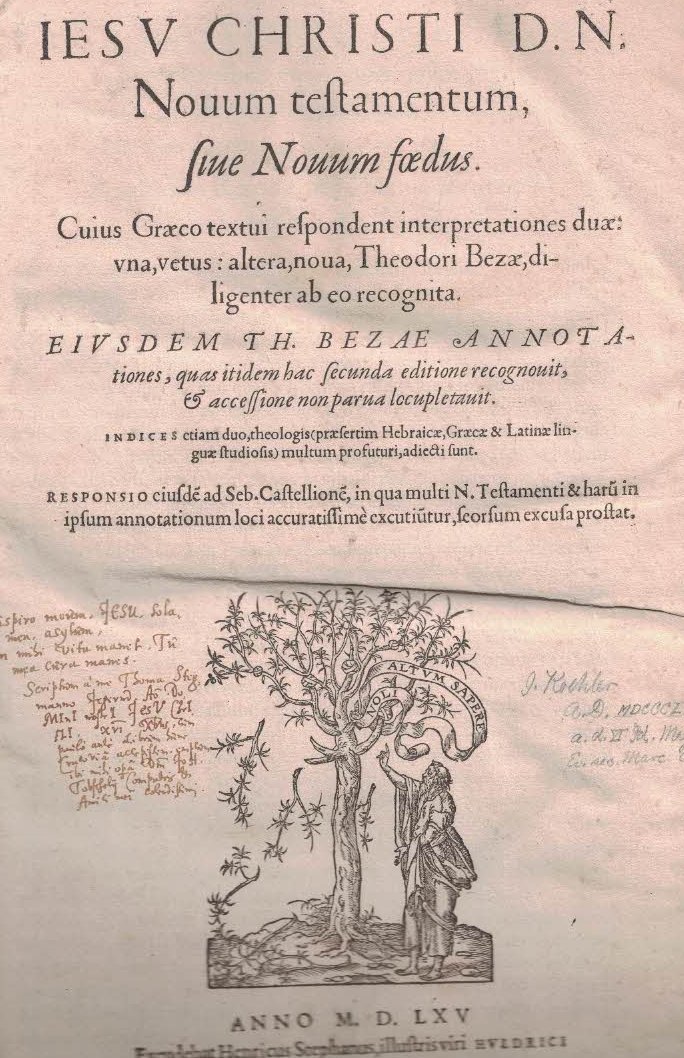 Brenz, Johannes. In Scriptum apostolo et euangelistae Mathae de rebus gestis Domini nostri Jesus Christi. Commentarius. Tübingen, 1566. 749 pages. Commentary on Matthew. The printer’s device shows a lamb triumphant over a dragon and the words in Latin “Behold the lamb of God who takes away he sins of the world.  Folio. Blind-stamped pigskin over boars. Two clasps, but the pigskin has shrunk so they do not close. Brenz, 1499-1570, consistently supported Luther in communion controversy. He was Luther’s most reliable friend in Southern Germany. The two works by Brenz are bound as one volume. 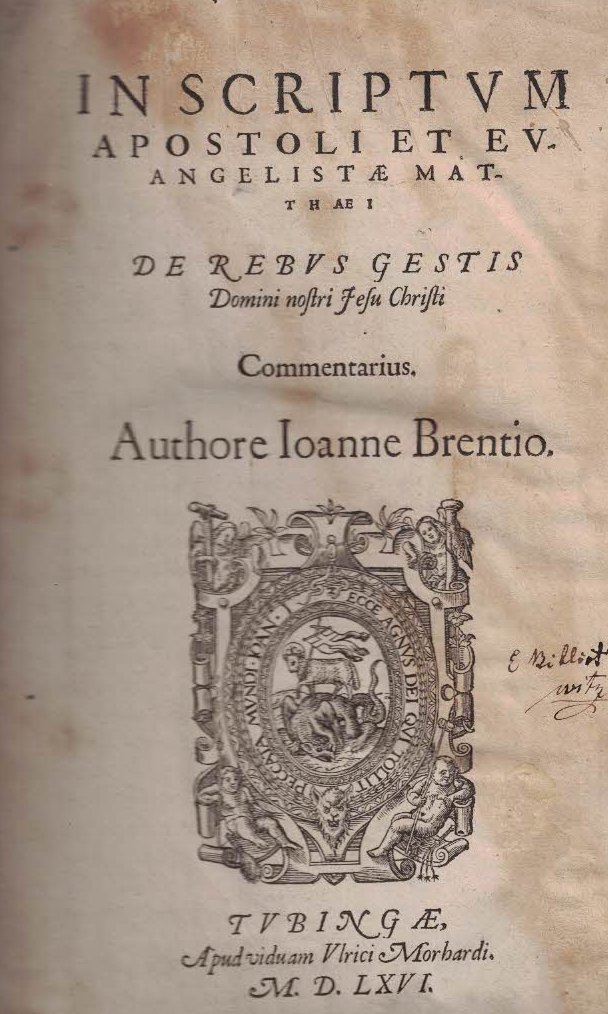 Calvin, John. Der Heylig Brotkorb. 1584. 86 pages. Bound in same volume as Fischart, Bienenkorb. Calvin, 1509-1564, His most famous work is the Institutes of the Christian Religion. Octavo.

Chemnitz, Martin. De Duabus Naturis in Christo (Concerning the Two Natures in Christ). Leipzig, 1578. 559 pages. Martin Chemnitz, 1522-1586. Bound in one volume with two volumes by Heerbrand below and Wigand, De Ubiquitate. Quarto. Blind-stamped pigskin with annunciation scene front and back. 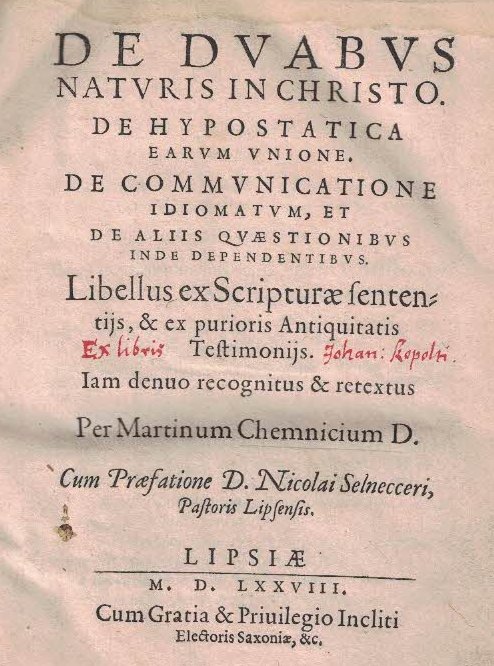 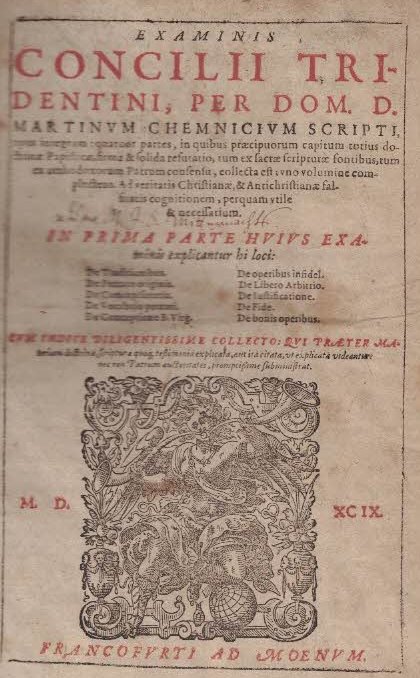 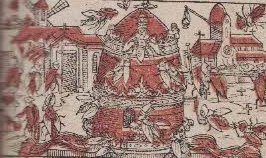 Flacius Illyricus, Mattias. Catalogus Testium Veritatis. Argentinae [Strassbourg?], 1562. 586 pages. Matthias Flacius Illyricus, 1520-1575. This work played a significant role in the writing of the  Formula of Concord. Flacius was an important Gnesio-Lutheran. This book first appeared in 1556 and the title in English is Catalogue of the Witnesses of the Truth. Flacius aimed to collect all those “witnesses” throughout the centuries who had resisted the control of the papacy and proved the theological theses of the Protestant movement. See Douglas Allen Grandon, Flacius Illyricus and his Catalogus Testium Veritatis. St. Louis, St. Louis University Press, 2001. Folio. Modern 20th century binding half calf. 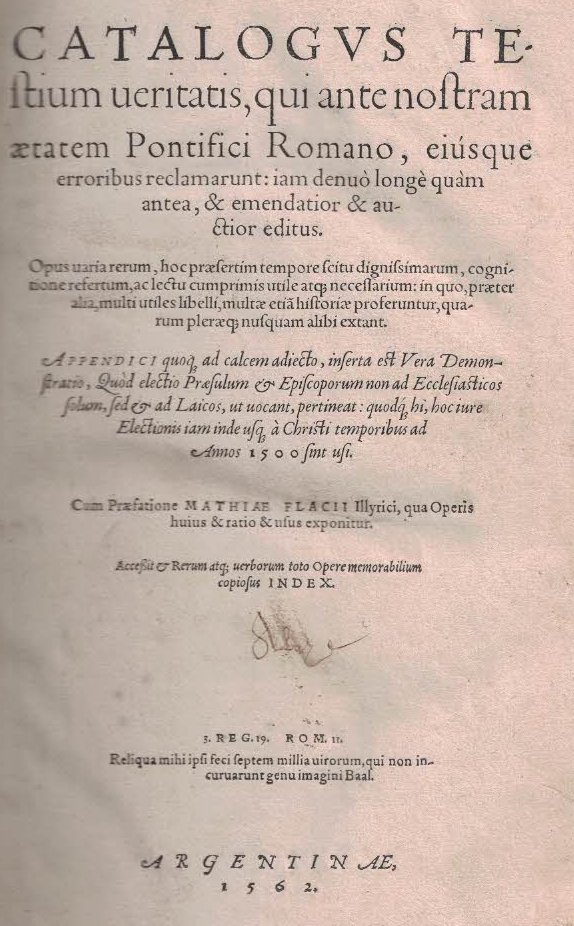 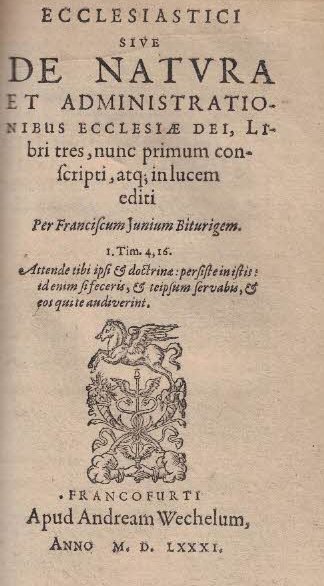 Oecolampadius, Johann, translator. Theophylacti archiepiscopi Bulgaria. In Quatuor Evangelia ennarrationes. Basil, 1527. 221 folios. Commentary on the four gospels. Theophylact, 1050-1108, was Archbishop of Ochrida, and Metropolitan of Bulgaria. His Scripture commentaries had influence on Erasmus’ edition of the Greek New Testament.  He wrote commentaries on some books of the Old Testament and all of the New Testament except for Revelation. Johann  Oecolampadius, 1482-1531, helped Erasmus with his edition of the Greek New Testament. Oecolampadius was affiliated with Ulrich Zwingli and attended the Colloquy at Marburg. See Mickey Mattox, Joannes Oecolampadius, an Expositor of Genesis, 2013.
Folio, blind-stamped pigskin over boards. One clasp missing. Some damage to lower corners of some leaves; some worming. 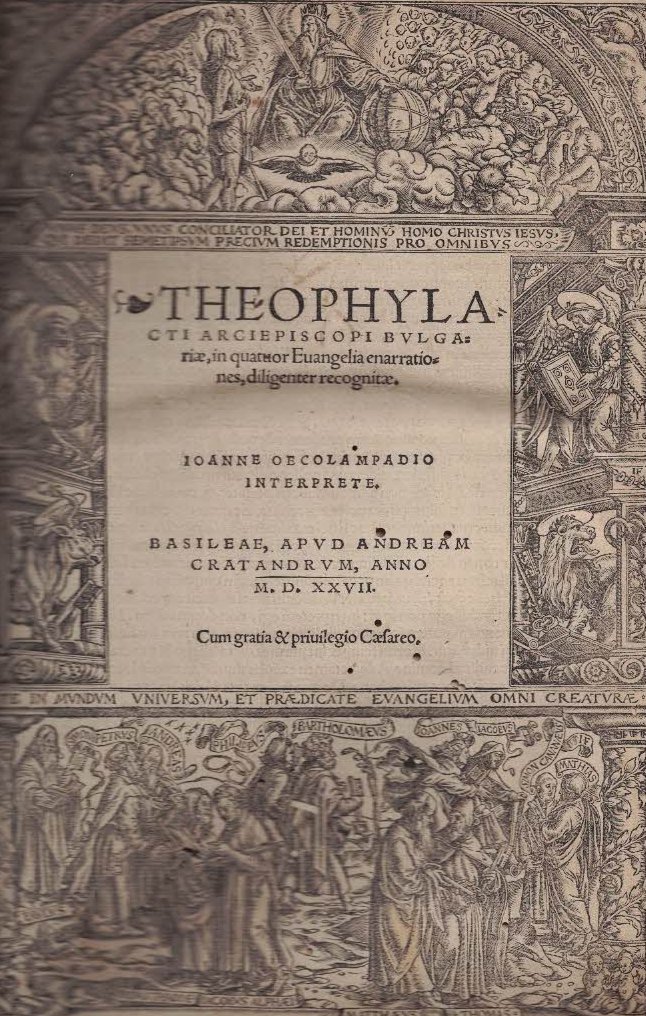 Porsena, Christopher, translator. Theophylacti, archiepiscopi Bulgaria. In Omnes Divi Pauli Epistolas Ennarrationes. 1529. 169 folios. This is a commentary on the Epistles of St. Paul and is bound in the same volume with Theophylact’s Quatuor Evangelia.

Pezel, Christophor. Consilia sive Iudicia Theologica. 1600. 671 and 461 pages. Octavo. pigskin, joints cracked. Front fly leaf missing. Pezel, 1530-1604, began his theological career as a Lutheran and follower of Philipp Melanchthon, 1497-1560, but later turned to Calvinist theology and was a strong critic of the Formula of Concord. Bound with this Francisco Junius, De natura, above. 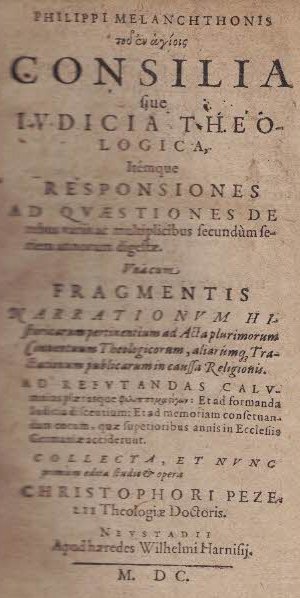 Rhegius, Urbanus.  Deutsche Bücher und Schriften. Four volumes bound as one volume, Nürenberg, 1562. Vol 1 247  folios; Vol 2 242 folios; Vol 3 106 folios; Vol 4 215 folios.  Urbanus Rhegius, 1489-1541, was superintendent in Lüneburg, worked on the Wittenberg Concord of 1536, and attended the meeting at Schmalkald in 1537. He signed the Wittenberg Concord and the Schmalkald Articles. Blind-stamped pigskin over boards; the blind stamping shows one metal clasp present, the other only half there. The book is in very good condition. Printer’s device: viola player ridine on a porpoise.

Wigand, Johannes. De Ubiquitate seu Omnipraesentia Dei. Tübingen, 1589. 115 pages. Wigand, 1523-1587, was a staunch Lutheran in various controversies. One of the authors of the Magdeburg Centuries. This is bound in the same volume with Chemnitz, De Duabus Naturis, cited above, and the two volumes by Heerbrand. 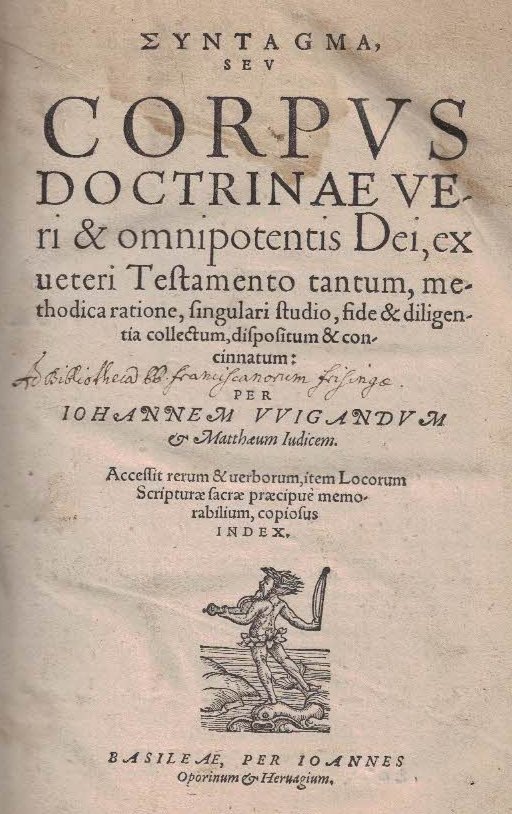 Much of the data on this page is taken from Deutsche Biographie (http://www.deutsche-biographie.de/index.html), Lutheran Cyclopedia, ed. Erwin L. Lueker, St. Louis: Concordia Publishing House, 1975, WorldCat, and from annotations by Edgar M. Krentz..